I take a lot of photos and even now, some of them still don’t always turn out. The majority of the time I’m taking photos for businesses and brands I work with so my approach always comes from a marketing focus.

A few things to note before getting started is that I usually set aside 2-4 hours for taking branding photos in a flat lay setting. This gives me time to capture visual content for multiple clients and purposes all at once. I batch edit them with one of my presets intended for basic exposure and color correction and save them in their appropriate folders for further editing (according to brand/purpose) and use at a later time.

Everyone has their own process but I find that for me, this process has standed the test of time over the last few years.

1. Get your props together

Getting everything together will streamline your entire photo session. I put everything in a small box, tray, or a tiny pile on the floor next to my work space. This will depend on the size of the props you use for your flatlays because you don’t want to store them anywhere that might interfere while you’re taking photos. 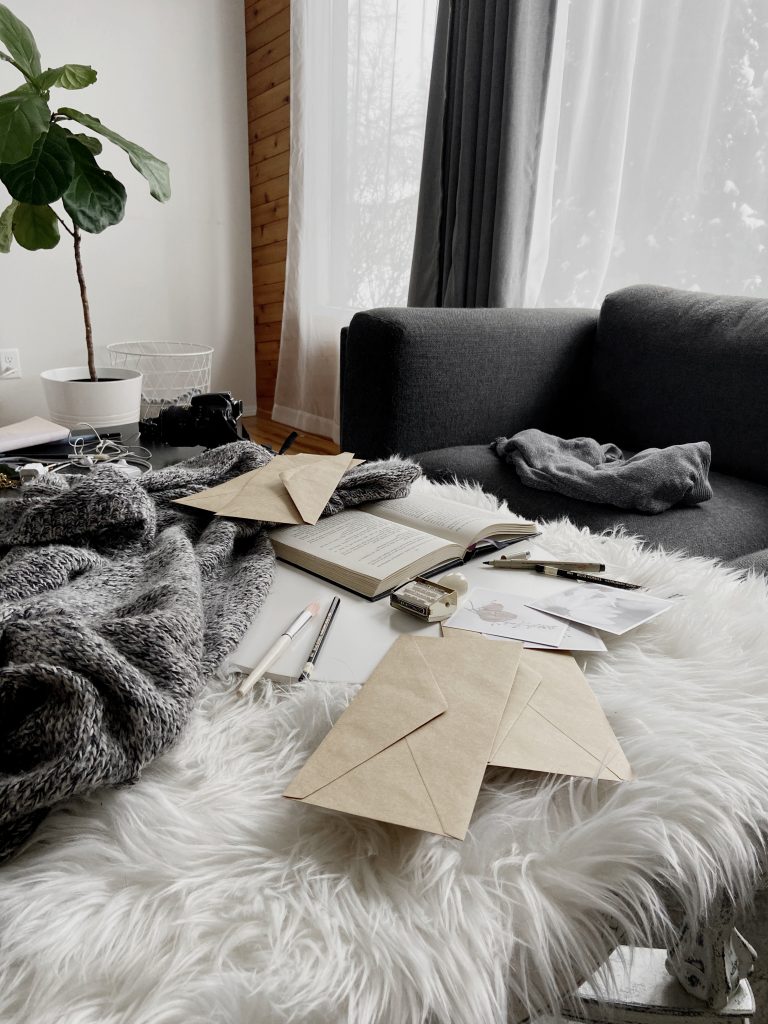 Don’t overthink your props. Have you been doing the infinity scroll on Pinterest or Instagram thinking that your flatlays will never look as good as the ones you save and pin? I’ve done it. We’ve probably all done it. Props for photos don’t need to break the bank and they’re not some unattainable collection of fancy items reserved solely for photographers. You take flat lays like a pro too! I’ve built up quite the collection of items for my own photography and I store everything in my a closet in my basement. However, you can start right now with items you already have. Janelle over at Janelle Dudzik Photography has an awesome list of 101 items you can use for flatlays. Not only is it perfect for people with less experience and are less comfortable with flat lay photography, it’s perfect for people like me who have been taking branding photos for a while and need new ideas and inspiration.

These will depend on the purpose of your photos but it’s always a safe bet to start in your workspace because those will generally be items related to your business. I had Janelle’s list on my phone and I went around my home office collecting items as I scrolled through her prop list. Considering I take photos all the time, I was surprised at a few of the items on the list that I never considered for my brand photography sessions.

Brand photography is fun (at least for me it is) but don’t lose track of the purpose behind it. Whether you’re taking flat lays for a blog post, product, or your social media – make sure you know what you need. This list doesn’t need to specify the exact composition, it just needs to keep you on track.

For me, I usually just jot it down in a notebook that I can keep nearby and glance at as as I go. This is also the list I refer to before I wrap up my photo session. It usually consists of things like:

→ how many photos you need

→ any combinations of subjects and props you need (or want)

→ any ideas you’ve had about styling your photos (don’t let that inspiration go!)

I batch shoot my photos for myself and clients. Often, I have multiple lists or sections to my list so that I can be as prepared as possible for the following weeks with content ready to go. If you have blog posts or social media campaigns that you know are coming up, try shooting some photos ahead of time.

This the second best part (the first is getting to browse your final results later). Your props are already nearby and you have your handy checklist of what you need to take.

Take your flat lay photos in the best lighting

I have fabulous natural lighting in my living room so I tend to take a lot of photos in there. Not everyone is so lucky though!

→ set up a table in front of a window

→if you can’t access a window with nice lighting, set up on the floor in front of a door (a glass/see-through door)

A few things to try if you don’t have access to nice natural lighting:

→ use a light background

→ careful with props that reflect lights from above and lamps

You can also invest in some inexpensive lighting if you feel it’s necessary. However, if you’re on a budget and photography isn’t your main service, I recommend investing time instead and mastering your photo compositing + editing skills. You’ll learn more about adapting to different photo situations and eventually get better as a photographer. That being said, investing in a softbox, reflector, and/or a lightbox can also be really handy if you’re going to be doing a ton of photos for your business or products. 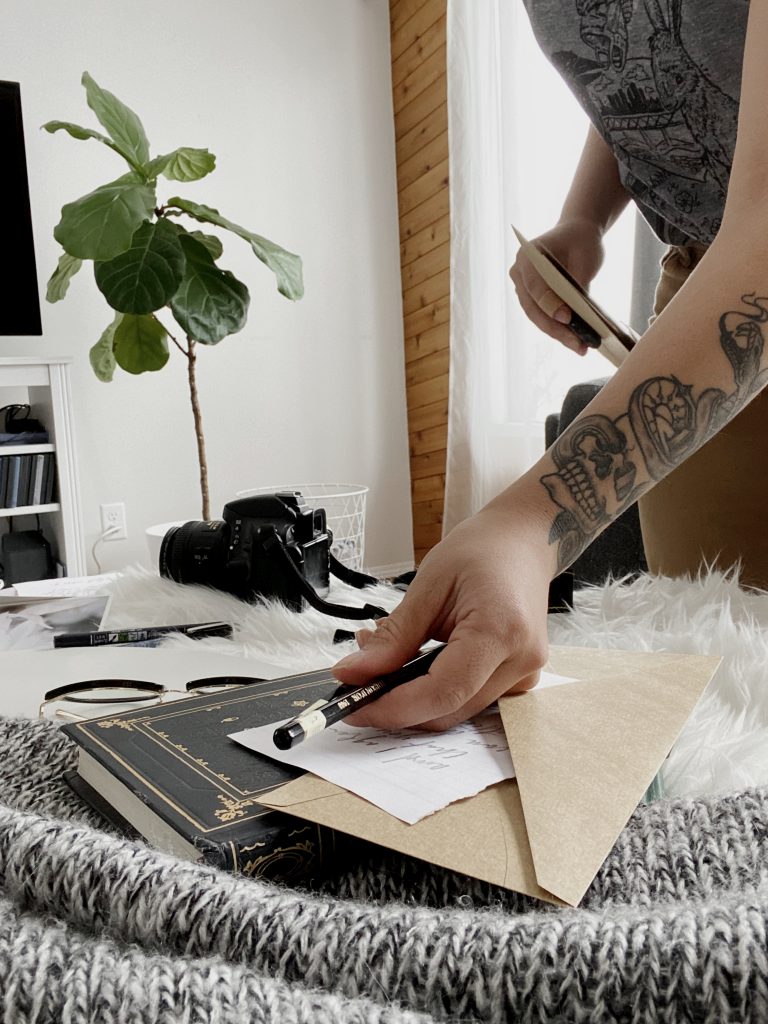 Take your photos with a smartphone or a dslr

Yes, you can still take awesome photos on a smartphone. I prefer my dslr but that doesn’t mean you won’t see me out and about rockin’ the iPhone. There’s so much more to a good photo than just the equipment.

Style your photos to look their absolute best.

Usually viewers are simply scrolling through photos, not analyzing them as to why a certain photo is appealing (or why it isn’t). However, there are a ton of things we can do to get the best possible photo every time. When it comes to flat lays, these are a few of my top photo tips:

→ watch your angles and how things line up; this might not be noticeable as you take the photo but when you look at it later you might wish you adjust that pen so it went out of the frame at an angle instead of lining up perfect or your glasses aren’t quite lined up with your notebook but their not angled enough to look like it was meant to be like that

→ adjust your scene multiple times – remember that with flatlays, if you only adjust your angle than you will still only be getting a single photo; instead, adjust the props around your main subject so that you have a larger variety of photos to pick the best one from later

→ if you’re using something with a screen (like your phone, tablet, or computer), try pulling something up on it so it’s showcasing your work too (put up your website or your social media page); or, if you’re saavy with photoshop and editing later, you can put up a white screen so you can easily edit in a specific graphic later

→ use props with a story behind them if you’re simply shooting for content on social media, this way if you struggle for a caption later, you can just talk about that prop

→ don’t zoom in on your photo, either move closer to get a new perspective or crop it later; it’s actually easier to slightly go out of the perfect frame just in case you find you need something different later

4. Review your checklist, all the photos you’ve taken, then take some more.

It’s so much easier to just snap a few more photos while you have everything ready than to finish uploading your files and realizing you missed a shot. This doesn’t need to be an in depth review. Look at your checklist and make sure everything is crossed off then scroll through your photos. Even a quick browse will do.

Sometimes you’ll spot a flat lay that looks slightly awkward and because you already know how you composed that photo, you can just reposition all your props and adjust it differently to get that perfect photo.

5. You crushed all your photos in one go, now crush all your editing too.

This is part of the reason I like to set aside a few hours to do flat lay photos. Everything is fresh in mind and you might be tired from shooting and sick of seeing all those props but do your future self a favor and upload those computer as soon as possible.

I run them through a preset in lightroom immediately after I’m done shooting. It’s nothing fancy – just simple lighting and color correction. I also don’t do any cropping at this point because I’m only cleaning up the photos and not prepping them for their final destination yet.

Most of my photos are for other brands or uses so I don’t put them through my own personal presets. Even if I don’t do anything with the flat lays I just shot, at least they’re all exported and ready to go for when the time comes to use them.

And there you have it, flat lay photography in a nutshell. If you have any questions or want more details on tips or editing – let me know!

Think outside of the box for branding photoshoots. If a studio might not cut it—whether it be the aesthetic, the availability, or something else—look into local show homes, local businesses, or coworking office that offer spaces for photographic use! 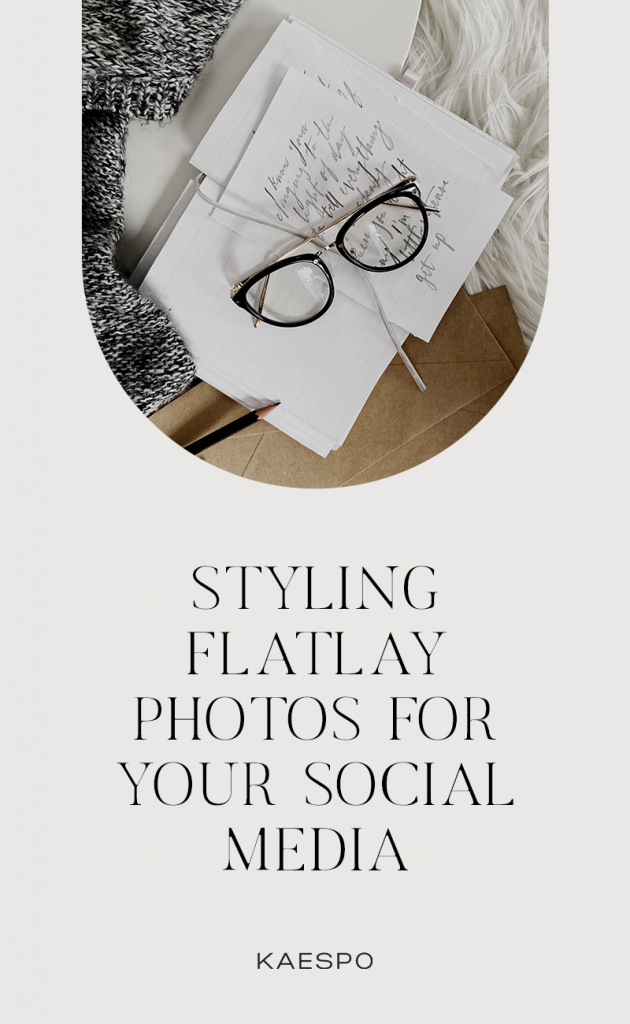